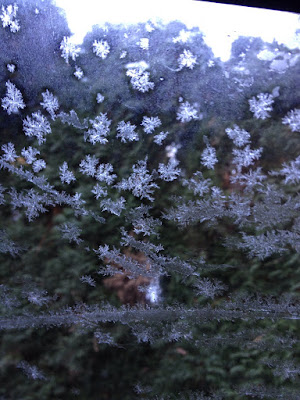 I've felt that deep darkness more this winter than I believe I ever have in my life. Waking up with a feeling of dread, fielding an overwhelming sense of unrest, anxiety's cloud glooming around my head as I walk through the dark house to make school lunches, prepare for the day, try and make sense of the hundred things floating around in my head that I need to do.

I find myself hoping to be quiet enough that the kids won't wake up from my noise, so I can have just a little time to myself downstairs before the din of morning swells. The other side of my brain - I find the din of morning to be a welcome distraction from all the darkness, and so when they wake up, be it on the right or wrong side of the bed, the sleepy frustration and snuggly love and all that's wrapped up in parenting through the before-school hour creates a protective cage for me to keep the dark at bay.

If I can get through the first hour, the first hour and an half, I'll be okay. The light will come into the sky and the day will have arrived and the demons in my head subside. Light brings goodness, and neighbours emerge from their units, and smiles are attempted, and breathing softens. I trudge on into my day, tentatively ready to fill it with errands and cleaning and driving children and if I'm lucky, some down time.

It was a long, hard early winter. I'll speak in past tense now because the darkness is subsiding, quite decidedly. The beauty of Christmas and the girls and Ryan being home for two weeks, the lights and the peace that descended on our home as the last of the gigs was played and enjoyed, and the slow pace of a family that is just slightly under the weather insists upon....it resulted in peace. Deep, full peace in the middle of a raging ocean all around me.

The fall is normally my favourite season, and with such exciting changes in our household and life direction, particularly mine with the musical endeavours, it ought to have been one long gleeful dance of creativity and momentum and love. And there was some of that. I spent the summer and early fall writing music - it poured out of me, for better or worse, at an alarming rate. Songs about adventure and new directions and love and taking life by the horns. The days became shorter, and with the excitement about the music, and a timely and surprising opportunity for us to be doing a little fun music on a national commercial, we took on the huge job of marketing ourselves silly, with every spare moment filled with discussions and debates about better marketing strategies and new ways to get the music into peoples' ears. It quickly became too much, and after several weeks of overload, my body began to react, forcing a slow down. Faintness and nausea and strange heart rhythms and an increase in anxiety are not things to ignore.

Through the coming weeks I would carve out a safety cage around myself, not allowing myself to get swept up in new ideas and the pressure to implement them.

I was growing and learning, and that's not a bad thing. And then I grew and learned some more as we struggled to find a direction with our plans for recording an album. Decisions were made, things were shuffled and shifted, and another dip in my strength and ability to remain above the water ensued.

Have I mentioned this thing called "vulnerability"? This has been a huge theme of not only the past few years, but particularly this past fall and winter.

As a child, I was terrified of playing my music in front of anyone, even my family. As I've been experiencing new levels of vulnerability and being exposed this fall, I've been thinking about that part of myself, and why I was so scared to do it. Why did I need to stop playing the piano when someone came through the room? Why wasn't I able to continue the song for them to hear? I think I'm getting to the reason these days.... music has always been something that has connected with my heart. I'm talking about my deep, full, emotional and all-feeling heart. When I would play the piano as a kid, even when I was 6 or 7, I was connecting in with that heart, with a feeling that I can't describe as anything but the source of my being, where I was made, how I was intended to thrive in life. This connection that happens, that happened even when I was a child, was so intimate and deep for me that I just couldn't bear to expose it to anyone else. I wasn't able to separate the music from my soul, and so when I played for people, it felt as if I was completely laying myself bare, that there was nothing left that I could hide, and it was totally terrifying. 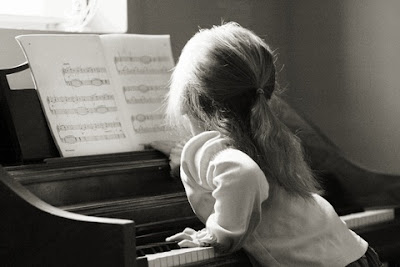 I don't know if I'm unique in this. Maybe everyone has something like this that makes them feel like they are connecting in with eternity, or God, or something that is so true to their essence that it causes them, like me, to break down and weep at one moment, and in another swell with an overwhelming sense of life that makes them feel like their heart might just burst out of their chest.

As I grew older, and grew into my early adult years, I managed to figure out a way to protect my heart from the music. That sounds sad as I write it, and I suppose it is. Throughout the past few decades I've been playing music in bands, or leading the music at church, and managing through with a sense of protection. I've learned, become more skilled, and had a great time, but rarely have I ever felt that raw sense of going deeper into the creativity and the raw expression. Only when I've been closed into a room by myself, my guitar or piano becoming an extension of my heart, have I really re-connected with that deep place.

This closing up has probably been the reason that I have often felt hesitant to perform much with Ryan. When we would perform, which we did do over the years, but only seldom, we were going a little deeper. I was approaching that place of connection and vulnerability. And so I hesitated. Ryan thought I was crazy to not want to do it. I didn't know how to explain why, or even understand all that I'm beginning to understand now. I just knew I was terrified to be pressured into performing, or to play any of my own music for others.

And so you see, friends, that this decision in the summer to make music my main occupation, to enter into the world of songwriting and performing, was a HUGE thing for me. I was deciding to face that terror head on. To open myself back up to the place I connected with as a child, that I connected with in the quiet of a room when I was alone, and flood all that out into everyone's ears and minds. I would need to stand up in front of people and pour it all out.

Can you picture that? Can you feel my terror? The word "vulnerability" doesn't even come close to how it has felt. Laid bare. Exposed. No words are adequate.

Yet, I have been surrounded by love and acceptance. I have been offered so many words of encouragement. I am constantly second guessing myself. I am acting under the belief that everyone is just being nice. And then I have a moment when I connect in with other musicians who I admire and they seem to like what I'm doing, and I think that maybe I'm not too bad after all. And then I think everyone is just being nice again. You know the impostor syndrome? This is a close cousin of it. I call it the "everyone's just super polite and lying to me" syndrome. It's a really frustrating place to be.

But in the end, the thing I keep telling myself is that this isn't about what others think of my music, not when I get down to the core of the thing. This is really about an act of courage on my part. And it's about doing something that I feel is what I was intended for. And it's about sharing, and offering, and doing what I can to bust some more light into the world. If my music is bad, well then bad it is. It's not really the point. The point is that I'm doing it, and in doing it, if I can show myself to be courageous, maybe, JUST MAYBE, I'll inspire someone else to search out their core calling. Or maybe I'll make someone happy. Or maybe I'll make someone laugh. Any of those things are worthy of the torture of this thing I'm doing.

So there you have it. It's a beautiful, wretched thing.

And I hate it.

And I love it.

And I must do it. 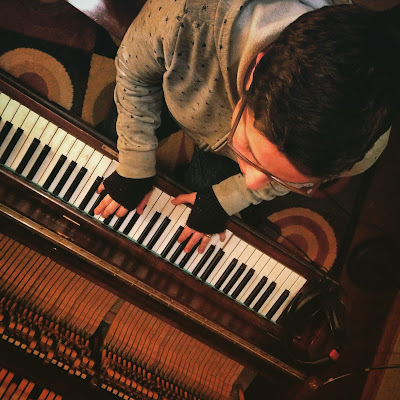